Loaded #MathMondays this week. How dominant @ntaylorgolf59’s win truly was by his standards. Respect thru the noise to @PhilMickelson’s commitment to 💣💣 + the consistently amazing day for @MavMcNealy on the greens. (And a challenge to my data mining friends) pic.twitter.com/9KTWixOT9Y

Let’s be honest, the last 18-24 months of Phil Mickelson have been the best stretch of his career… for us as consumers. You can have his joyful leap at the 2004 Masters, but I’ll take youth-guiding, Phiresiding, sound bite appetizing, Tweeting, Unapologetic Bombing Phil Mickelson all day at this point. Even as the most sympathetic superstar of the past 25 years, don’t you feel closer than ever to him now?

Cue the distance debate, where Phil dropped different bombs on the discussion about athleticism and issues he has with the governing bodies. While it seems some of the loudest voices in golf media support some level of bifurcation or complete rollback, Phil is Team Hulk Smash. He was quickly blasted by many for his take, but I think much of it had to do with his inability to properly communicate his numbers. So, let me do it for him…

Mickelson has never been a short hitter in his career. In the late 1990’s, before the solid core golf ball accelerated distance, Mickelson annually ranked in the top 10 in driving distance on the PGA Tour. He is tall, he is flexible, and he has incredible hands to deliver a perfect strike. It made sense. He was also in his physical prime, just shy of his 30th birthday.

What has happened more recently – once Phil turned 40 – is his understanding of what it would take to stay relevant in the game. Any golfer should, naturally, decline in speed as he ages – Dustin Johnson lost 2 mph last year over five years ago, although his knee may have something to do with that – but Mickelson has found a way to not just gain speed as he approaches 50, but gain it at a rapid rate. 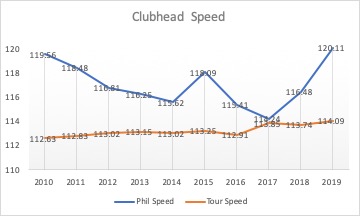 The chart above shows Mickelson’s clubhead speed over the past decade. In 2010, he ranked 9th on the PGA Tour at that speed, bottoming out in 2017 at 91st on Tour. “New” Phil has committed to both length as a strategy, and fitness for sustainability to see incredible gains. His speed gain from 2016 to now is right around 4%. The Tour average speed improvement is just under 1% in that same time frame. Phil has quadrupled Tour average in his speed improvement, in his late 40’s!!

So, in many respects, Phil was correct. A commitment to athleticism and speed can have big gains, more than just the control line of technological advances shows. While his delivery could probably use an adjustment, his physical wonder should be championed, especially with some recent positive results. What he is doing at his age is impressive. Case in point… 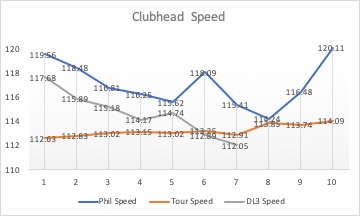 This second chart adds Davis Love III to this equation. DL3 was just as long, if not longer, than Mickelson back in the late 90’s. Love is five years older than Phil, so his decline in speed in the first four years on this chart would be what you would expect Mickelson’s to look like on the final four years of hisI Again, impressive.

Not to drop a bomb on this whole blog and throw all of this evidence under the bus, but there was an interesting (perhaps coincidental) discovery I made when looking this data over…

I was drawn to Phil’s speed in 2015, when he suddenly gained 3 mph and dipped back down the following year. There was no significant equipment change for Mickelson that year. (More on 2015 in a second)

While Mickelson is hitting it farther now, there has been a sharp decline in his iron game over the past year. He posted his worst Strokes Gained: Approach season in the ShotLink era last year on the PGA Tour, just above the 0.0 mark, and has seen his 50-round average (as of the end of Pebble Beach) drop to the lowest of his career, SG: App of -0.18.*

*Courtesy of DataGolf
It marks only the second time since 2004 that Mickelson has seen this 50-round average dip below average/zero. The other time?! Yep, you guessed it, 2015. Could a commitment to trend-defying speed be costing him with the irons? That seems like the more relevant question than whether or not Mickelson’s speed gains are justified or not.